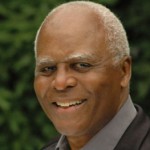 From Pvt. Sugarman to Col. Tigh, Terry Carter has had a most distinguished career in the arenas of television, film and theater. One of the few blacks appearing on America’s TV screens in the 1950s The Phil Silvers Show, Carter already had many credits in theater and radio before becoming one of the preyed-upon privates in Bilko’s platoon — always broke, yet always ready to do their sergeant’s bidding.

In the mid-1960s, Terry Carter was a newscaster for WBZ-TV in Boston and a commercial spokesman for Standard Oil. As a “veteran” black actor, it is no surprise that Terry Carter was cast as Gail Fisher’s husband, policeman Marcus Fair, in a flashback episode of Mannix. By the 1970s, Carter was among many blacks who graced our TV screens in a variety of roles. In a recurring role on McCloud, Carter worked up from Sargeant (1969) to Chief (in the 1989 reunion). In Battlestar Galactica, Carter was Col. Tigh, no longer a hapless private in an embattled platoon. He was Lorne Greene’s second in command, a crew member whose opinion and counsel was respected. Quite a promotion from the Bilko platoon.

Since his Galactica days, Carter has been directing and producing, as well as creating training programs. He portrayed the CIA chief in the recent film Hamilton. He resides in Norway with his wife.