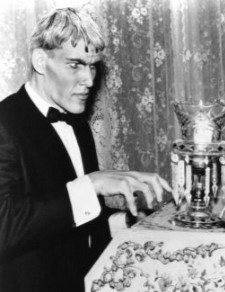 Born in Pittsburg, PA and raised in Phillippi, WV. Ted Cassidy was a well respected actor who portrayed many different characters during his film career. His most notable role was Lurch, the faithful butler on The Addams Family TV series. He also portrayed the disembodied hand on the show named Thing.

Other roles Mr. Cassidy is noted for are Harvey Logan in “Butch Cassidy and the Sundance Kid”, Injun Joe in “The New Adventures of Huck Fin” TV show and Ruk in the Star Trek episode “What Are Little Girls Made Of?”

Due to his large size,(6ft. 9in.)he portrayed larger than life characters. His acting career spanned Three decades. He even relived the role of Lurch in The Addams Family Animated cartoon, on the Batman TV series and a Reunion show in 1977.

Ted Cassidy died in 1979 from complications following open-heart surgery. His live-in girlfriend had his remains cremated, then buried in the backyard of their Woodlawn hills home. She did not have the remains moved when she relocated.

Somewhere in Woodlawn, an unknowing house-buyer has a celebrity in their backyard!