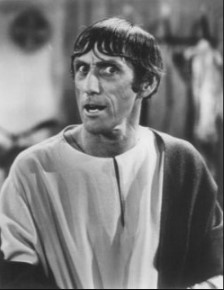 If you’ve been around long enough, you probably know this versatile actor as Exidor, the long-robed emissary for any number of way-out cults and cosmic clubs who alternately aided or sidetracked Bolder, Colorado’s most illustrious visitor in Paramount Television’s “Mork and Mindy” (1978-1982) which starred Pam Dawber, and Robin Williams.

But you may also know him for his many memorable feature characters in “Cool Hand Luke”, “El Dorado”, “High Plains Drifter”, “Vanishing Point”, “Fools Parade”, “Chisum”, “Last Hard Men”, “Damnation Alley”, “Bite the Bullet”, and his starring role in “Under the Rainbow”.

He has also appeared in hundreds of television offerings, guesting on such shows as “Charlies Angels”, “McCloud”, “Columbo”, “How the West Was Won”, “The Incredible Hulk”, “The Misadventures of Sheriff Lobo”, and “Eight is Enough”. You may have also seen him in some of the recent “Stupid Golf” videos with Leslie Neilson.

Born in New York City, Donner grew up in New Jersey, Michigan, and Texas, attending school in those states and California. After graduation from high school, he joined the Navy, serving three years, 11 months, 29 days, and six and one-half hours.

Donner enjoyed the West Coast and decided to stay. To make ends meet he labored at various odd jobs such as shipping clerk, bartender, salesman, commercial artist, gardener, and as an insurance investigator. At nights he attended San Fernando Valley State College (now California State University, Northridge), taking courses in Art History, Psychology and speech; not with an acting career in mind, but to cure an insecurity problem. That problem stemmed from a foray into the acting field during a fifth grade production in which he portrayed Abraham Lincoln.

During this time, Donner lived in Studio City and became friends with an actor who lived in his apartment building. The actor urged him to study drama, telling him he was humorous and had a good face. That actor was a man named Clint Eastwood and Donner’s first professional break was a direct result of his aid and advice.