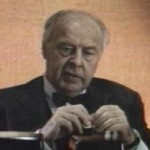 Houseman co-founded the Mercury Theatre with Orson Welles in 1937 and helped write and produce some of their ground-breaking achievements, notably the stage production of Julius Caesar (1937), the controversial radio production of War of the Worlds (1938) and the landmark film CITIZEN KANE (1941).

After an acrimonious dispute with Welles over the authorship of KANE, Houseman embarked on a fruitful period of film production, collaborating with the likes of Max Ophüls, Vincente Minnelli, Nicholas Ray and John Frankenheimer. Between 1945 and 1962 he produced 18 films for Paramount, Universal and MGM. In the early 1970s Houseman established a second career as a character actor, developing a crusty elder statesman persona which he later reprised in several TV commercials