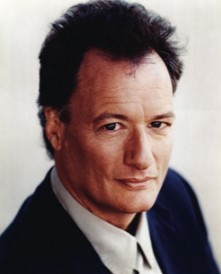 John de Lancie, whose portrayal of the mercurial character “Q” in “Star Trek: The Next Generation” has made him internationally (if not intergalactically) famous, was not always an omnipotent being descended from the Q Continuum. In fact, he comes from Philadelphia.

Born in the City of Brotherly Love to Andrea and John de Lancie, young John distinguished himself while in his pre-teen years by flunking the fifth grade after racking up the most detentions ever given a child his age. They thought he was “a little slow”, only later to discover that he was simply dyslexic.

At 14 de Lancie played the part of Henry the Fifth in the school play; to everyone’s astonishment (including his own) he was good. This fact was not lost on his father (First Oboist for the Philadelphia Orchestra and Director of the Curtis Institute of Music) who, thinking “any port in a storm”, suggested to his son that he become an actor. The die was cast.

John de Lancie then went on the Kent State University where he immersed himself in the drama program and, yes, he was there during the “Troubles.” After Kent came the Juilliard Drama School, and after Juilliard de Lancie joined the American Shakespeare Festival at Stratford. At the close of the season he was offered a contract with Universal Studios in California. For two years he worked at Universal on over 35 shows including the acclaimed miniseries “Black Beauty”, “Little Women’, “The Thornbirds” and “The Captains and Kings”.

In 1980 John went back to the theater as a member of the Seattle Repertory Company. A year later he returned to Los Angeles and created the very successful character of Eugene Bedford for the daytime series “Days of Our Lives”. What ensued can only be described as a three-year “romp” that broke the mold of daytime TV and garnered de Lancie two People’s Choice awards as well as a reputation for creative eccentricity. John’s television acceptance speech has become a classic and it is still aired on highlight reels fifteen years later as he thanks, “in order of importance”, those elements instrumental to his success: “props, cue cards and the lunch truck.”

John de Lancie’s unique twist on nearly all the characters he’s played continued into his next major role as the omnipotent “Q” on “Star Trek: The Next Generation”. While only appearing nine times in ten years, the cult popularity of this character is so widespread that Mr. de Lancie’s likeness has appeared in countless merchandising and promotional products. He has been the subject of hundreds of articles in newspapers and magazines and has won, time after time, the popular votes for “Best Villain”, “Best Recurring”, and “Best Loved” character in this vastly popular show. Independent television stations throughout North America, Australia and England have hosted “John de Lancie ‘Q’ Week” airing all his episodes together.

Mr. de Lancie has appeared in over one hundred television shows including “Star Trek”, “Legend”, “LA Law”, “Picket Fences”, “Civil Wars”, “Thornebirds”, “The Practice”, and “Touched by an Angel”.

Mr. de Lancie’s most memorable recent stage roles are Jack Tanner in “Man and Superman”, and Humphrey in “The Common Pursuit”. He has performed with Kurt Masur and the New York Philharmonic; Esa Peka Salonen Orchestra and Montreal Symphony; Charles Dutoit with the Philadelphia Orchestra and Montreal Symphony; Andreas Delps and the Milwaukee Symphony; and David Zinman and Lawrence Foster and the Aspen Music Festival Orchestra. He has also performed at the Kennedy Center. His repertoire includes “Peer Gynt”, “King David”, “The Bourgeois Gentleman”, “The Lincoln Portrait”, “St. Joan”, “Midsummer Night’s Dream,” “Young People’s Guide to the Orchestra” and, of course, “Peter and the Wolf.”

This season Mr. de Lancie performed at the Hollywood Bowl and will be the 1998/99 resident narrator for the L.A. Philharmonic Young Peoples Concerts. He is also a member of the Aspen Music Festival.

Mr. de Lancie held the position of Associate Artistic Director of L.A. Theater Works, the producing arm of KCRW-FM and National Public Radio, where the series, “The Plays the Thing”, originates. He has directed such plays as “Fallen Angel” with Annette Bening, Judith Ivey and Joe Mantegna; “The Waldorf Conference” with Edward Asner, Ron Rifkin, Shelley Berman and John Randolph; and the nationwide Halloween National Public Radio broadcast of “Invasion from Mars” with Leonard Nimoy. Mr. de Lancie has performed in many radio shows the most memorable being Cassius on the BBC Radio Production of “Julius Caesar”, co-starring Stacy Keach and Richard Dreyfuss.

Mr. de Lancie is co-owner, with Leonard Nimoy, of Alien Voices; a production company devoted to the dramatization of classic science fiction. Alien Voices has produced for Simon and Schuster Audio two hour dramatizations of: “The Time Machine”, “Journey to the Center of the Earth”, “The Lost World”, “The Invisible Man”, and “First Men in the Moon”, Alien Voices has also produced for the Sci Fi Channel three one hour live specials: “The First Men in the Moon,” “The Lost World” and a Halloween tribute to Poe, Wilde, and Kipling.

John de Lancie is married to actress-singer Marnie Mosiman, and they have two sons. His favorite pastime is sailing and dreaming about far-off islands.