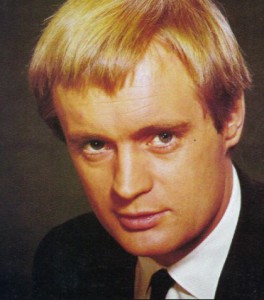 David was born on September 19th, 1933, in Glasgow, Scotland, the second son of David McCallum, Sr., a violinist, and Dorothy Dorman, a cellist, whose first son was named Iain

A few years later, the family moved to London, where both sons attended private (in Britain they’re called “public”) schools, and his father became concert master of the London Philharmonic.

McCallum junior inherited his parents’ talents, and was greatly encouraged by them to follow in their footsteps. McCallum senior, especially thought his son would become well-known in the music world, as he had, and in fact, David did learn the oboe and, as he put it, “(blew) my way through several symphonies before I decided that I didn’t want to become a musician.” Despite that statement, he certainly has left his mark on the music world with his recordings and compositions

Before choosing acting as his mainstay career, he spent part of the early 50’s with the Royal West African Frontier Force on the African Gold Coast, where he became an expert in explosives and small arms, which must certainly have lent credibility to the many roles he played which required that very expertise.

While Mr. McCallum has played many roles, it would be farcical to deny most fans above the age of thirty knew him first from his part in the mega-hit U.S. 60’s television spy series, “The Man From U.N.C.L.E.” As Illya Nickovetch Kuryakin, the cunning, mysterious, and sometimes acerbic, yet ultimately charming (at least to the female contingent of his audience) spy, Mr. McCallum drew forth from the sketchily-outlined role a character so vital that thirty years later, some people still have trouble separating the sanguine actor from the dour Russian. The role of the Soviet secret agent working in the New York base of operations of the ultra-secretive agency, the United Network Command for Law and Enforcement, more familiarly known as U.N.C.L.E., has haunted Mr. McCallum almost to distraction, as well it might, since his vast body of other contributions deserves better than equal recognition, if for sheer volume alone.

McCallum’s other roles of note include ‘The Invisble Man’ and ‘Sapphire and Steel’. He resides in New York, father of 4 grown children, with his wife Katherine, and he continues to grace the stage with his witty style and unique presence, to the delight of all fortunate enough to catch him in action.