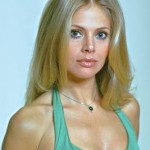 In the earliest stages of her career, Swedish actress Britt Ekland was “famous for being famous” as the wife of film comedian Peter Sellers.

Ekland had appeared in two Italian pictures before marrying Sellers in 1963, then co-starred with her husband in After the Fox (1966) and The Bobo (1967).

She enjoyed good reviews for her role as a prim Quaker girl who inadvertently invented the strip-tease in The Night They Raided Minsky’s (1968).

Most of Ekland’s subsequent films were low-budget action melodramas and leering sex comedies; she did however acquit herself nicely as James Bond’s vis-a-vis in The Man With the Golden Gun (1973) and in the 1973 cult thriller, The Wicker Man.

It is not likely that Britt Ekland will be remembered for her cinematic triumphs; chances are future generations will know her from her brief alliance with Peter Sellers, or from her tempestuous and well-documented private life, as recounted in her autobiography True Britt